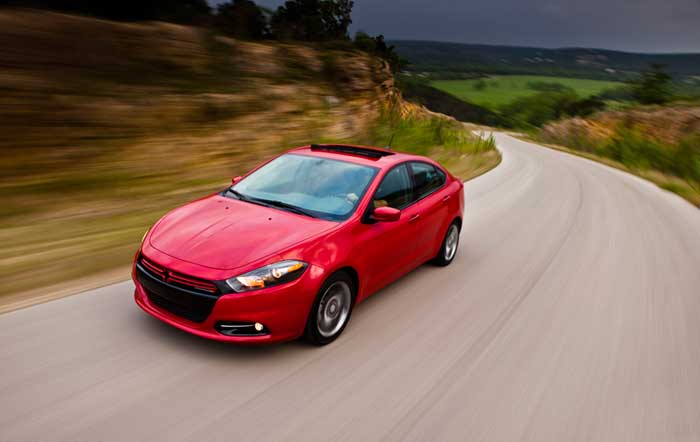 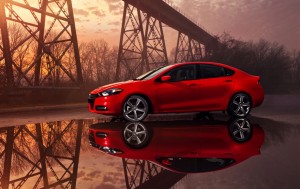 After a 37 year hiatus the Dodge Dart has returned.  The Dart has a long history in America, first sold in 1960 where it had significant success as an inexpensive, reliable family sedan.  By 1976, when the last Dart was sold, it had lost its market as it tried to be all things to all people:  a family car, an economy car, and (with variations such as the Dart Sport and Dart Swinger) a sports car — even a convertible was available.  Few tears were shed when the Dart was replaced by the late, lamentable, Dodge Aspen.

Now for 2013 the Dart has returned as a redesigned Alfa Romeo Giulietta (Alfa Romeo, like Chrysler, is a partner of Italian manufacturer Fiat).    Chrysler/Fiat spent about a billion dollars to redesign the Giulietta platform for the American market; the result is an attractive, fun to drive compact car that gets excellent mileage.

The Dart’s two available engines both get excellent gas mileage.  The base engine has an EPA rating of 24 City, and 34 highway which equals 27 mpg combined.  The Dart, like the Chevy Cruze it competes with, accomplishes such high mileage three ways:  It’s aerodynamic, has a small 4-cylinder engine, and offers a 6-speed automatic transmission.  Also like the Cruze, the Dart has an available turbo-charged that significantly improves acceleration.  Adding a turbo-charged engine to either the Dart or the Cruze increases the miles per gallon to 31 city/highway combined, but both engines require premium gas… and add over a $1000 to the price of the car.

The Dart is available in four different versions that run the gamut from inexpensive economy car to sporty luxury car.  The least expensive version, the SE, doesn’t include air-conditioning as standard equipment but does have power windows, anti-lock brakes, electronic stability control, AM/FM/CD/MP3 radio, a soft touch dash and a host of safety features.   Add a couple thousand and you have the SXT, which includes air conditioning, 17-inch alloy wheels, remote keyless entry, and other standard features and offers the turbo charged engine as an option.  Add another thousand and you have the Rallye version which adds a host of styling touches such as Black Chrome Headlamps, premium seats with accents unique to the Rallye, and fog lamps. 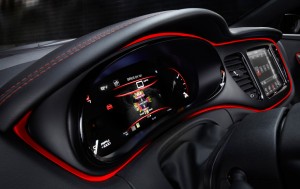 Standard in the Limited – a customizable, electronic display.

The most expensive version of the Dart is the Limited, starting at $19,995.  It’s the luxury, high-tech Dart with standard features that include a backup camera, a customizable electronic dash display, ambient LED interior lighting, and Chrysler’s Uconnect® System with Voice Command and Bluetooth® connectivity.  One last version of the Dart is expected to be available late in the year.  It is the R/T version and will feature a larger, more powerful 4-cylinder engine that is expected to offer improved acceleration, but possibly at the expense of fuel economy.

What’s the Dart like to drive?  Quite good, actually.  It’s quiet, handles well and with the turbo-charged engine has decent acceleration.  The front bucket seats are exceptionally comfortable and grip the driver firmly while the back seat is surprisingly roomy with good leg room for what is a fairly small car.  The steering is tight with decent road feel.  When you are driving the Dart its European roots show through, you don’t feel like you are driving a small car.  This is not to say it’s like driving a BMW, but it is good, every bit as good as a Volkswagen Jetta.

The Dart is the first true compact sedan that Dodge has offered since the Neon.  While nothing like the original Dart, it should enjoy the same success.  It is a better than average compact car that rides and handles well and is reasonably priced.  It is longer and wider than most of its competitors yet it remains inexpensive and fun to drive – which is a pretty good combination when you think about it.

If you have any questions about the Dart, feel free to leave a reply.  I try to answer questions within 36-hours, often sooner.

*MPG courtesy www.FuelEconomy.gov a division of the E.P.A.