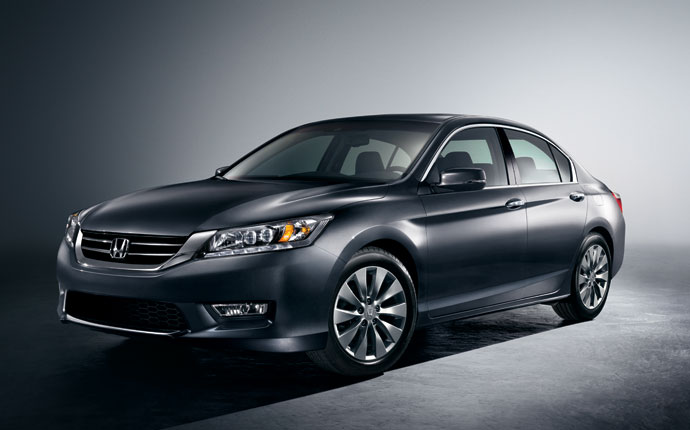 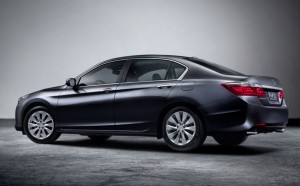 After 5 long years selling the rather boring 8th generation Accord Honda has finally released the next generation.  After a disappointing reception to the ninth generation Civic (released late last year) Honda needs a hit with the Accord.  And they just may have it. 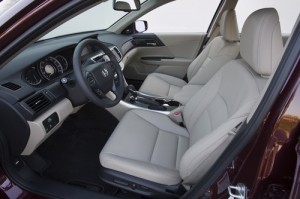 The new Accord interior loses the fake wood trim.

The 2013 Accord is, in most cases, only a few hundred dollars more than the previous model but it packs a lot more value.  Efficiency, style and value have always been synonymous with Honda and the new Accord lives up to all three.  Based on EPA testing the Accord’s 4-cylinder engine, paired with its new CVT automatic transmission, is more efficient than ever averaging 30 miles per gallon during combined city and highway driving.   The interior and exterior styling of the Accord have improved; the exterior benefitting from a crisper, more European look, while the interior has a rich, sophisticated look usually reserved for more expensive cars.  In fairness though, all manufacturers are doing a better job with interiors.  More and more you’ll see soft touch, finely grained surfaces instead of vast expanses of shiny black or gray plastic.

Where the 2013 Accord really excels is in value.  Honda claims they have made more than $2000 worth of formerly optional equipment standard.  While that’s a lot of money, it’s also a bit of an exaggeration.  Just because the purchaser may pay $2000 for the options doesn’t mean it cost Honda $2000 to make them standard.  Optional equipment has a huge markup so Honda can make it standard without any danger of going broke.  Some of the now standard equipment is dual zone automatic climate control, 16” alloy wheels, Bluetooth, USB/iPod integration, a rearview camera and a 160-watt AM/FM/CD audio system.  All this for only $21,680 means a lot of Accord for the money.

As usual with Honda I expect reliability to be excellent.  Unfortunately, and also as usual, Honda’s reputation for reliability and value mean that Honda dealers have little incentive to negotiate on price. Don’t go into a Honda dealer with the same expectations as you would when dealing with Ford, Chevy or Chrysler; Honda isn’t nearly as desperate to move product.

As it has in past years, the Accord lineup starts with the LX.  It is the cheapest model of the Accord and generally the best selling.  New to the Accord lineup are the Touring and Sport models.  The Sport model is targeted at a younger audience and, maybe because I am no longer a member of that audience, it has many features that just don’t mean a lot to me.  I have never considered paddle shifters paired with an automatic transmission a replacement for a stick-shift and a clutch.  Also, while I like the look of the 18” wheels, rear deck-lid spoiler, and the dual chrome exhaust trim I am not willing to pay extra for them.  The Sport edition starts at $23,390 with a 6-speed manual.

The Touring addition is more my style and no doubt aimed precisely for people like me who appreciate the finer things in life (or would like to, if they could afford them).  The Touring edition is the top of the line Accord and has a luxurious interior, pretty much every option you can think of, and a surprisingly fuel efficient 6-cylinder engine (21/34/25 mpg city/highway/combined).  The Touring edition has – a first for Honda – LED headlights and adaptive cruise control with a starting price of $33,430.

Overall the Accord looks like a hit for Honda.  It’s priced right, gets very good gas mileage for a non-hybrid and throws in a lot of nice options.  And, for the record, a plug-in hybrid version is coming in 2013.

If you have any questions about the Accord, feel free to leave a reply.  I try to answer questions within 36-hours, often sooner.

Quick Reference Table
The Accord compared with similar vehicles; all equipped with automatic transmission.