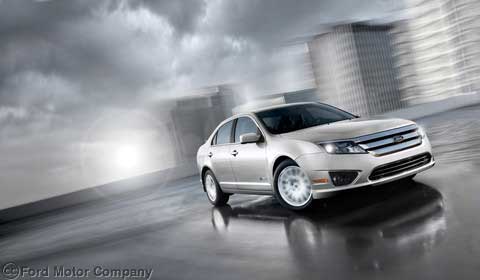 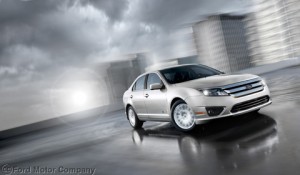 The Ford Fusion has been around since 2009 when it was released as a 2010 model.  At the time it was state-of-the-art, getting better mileage than the Camry hybrid at about the same price and with little competition (the Accord hybrid was available but had few takers).  What a difference a couple of years can make.  Toyota has improved the Camry in almost every way and Hyundai (and its Kia division) have their own hybrid sedans which maybe aren’t as good as the Camry but are a lot cheaper, leaving the Fusion out in the cold.

The Fusion hybrid is not a bad car by any means, there just isn’t anything to make it stand out.  Much like the Hyundai Sonata hybrid, it is a competent vehicle, but unlike the Sonata it is expensive.  Without rebates the cheapest Fusion hybrid is close to $30,000 and that’s with cloth seats, no GPS and no sunroof.  Not to say that the Fusion doesn’t have any options, it has some nice ones, such as dual zone climate control, Microsoft Sync and proximity sensors on the rear bumper to warn you if you are about to back into something.  It even allows the driver to enter a door code to unlock the car – I don’t know if this makes up for the lack of a smart key but Ford seems to think it does.  The idea is you can leave your car key in the car all the time and then use the door keypad to lock and unlock the car.  Personally, I prefer the smart key system that Toyota and Hyundai use where you don’t even have to put the key into the ignition (still a necessity with the Fusion).

Driving the Fusion is a pleasant experience.  The acceleration is good due to the combined 172 hp of the gas and electric motors, but it can get a little noisy if you need to accelerate quickly.  When not under heavy acceleration the Fusion is relatively  quiet and road noise is minimal.  The steering is nicely weighted and inspires confidence.  Finally, the ride is solid and the seats are very comfortable.   While by no means a sports car, the Fusion has ride and handling manners that remind me of a Volvo; solid and secure.

What impressed me the most about the Fusion is the Sync system designed by Microsoft.  Sync integrates the car radio with any Bluetooth enabled phone and accepts MP3 players such as an iPod using a USB port.  The driver and passengers can use voice commands to control radio volume, iPad selections, answer the phone and even get GPS directions. 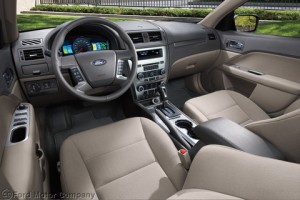 The biggest problem for the Fusion is that its competitors have either caught up with it, or in the case of the Toyota Camry hybrid, surpassed it.  Compared to the Camry the Fusion’s interior seems dated.  Where the Camry has soft-touch, almost leather like materials, the Fusion has hard plastic.  The Sonata hybrid is even worse than the Fusion when it comes to hard plastic, but it does have a smart key and is roughly $3000 cheaper. 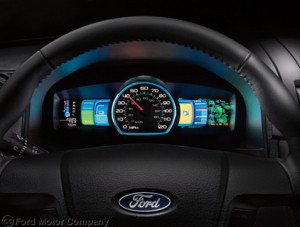 Ford Fusion guage package. Other than the speedometer I found them hard to decipher.

My biggest complaint with the Fusion?  It’s busy, indecipherable gauges.  With the exception of the speedometer (a nice, easy to read analog dial) the readouts for information like radiator temperature, battery charge, fuel efficiency, and miles to empty are either hard to read, hard to find, or both.  To Ford’s credit the display can be customized to show only what the driver wants to see, however, you better plan on taking a class on how to do the customization as it is far from intuitive.

The good news for fans of the Fusion hybrid is that Ford is planning on releasing a completely updated version in 2013.  Ford estimates it will get 47 mpg and attract a new audience with its daring styling.  But that is in the future.   For now the Fusion hybrid is a decent car that seems a bit dated and a little over-priced.  I think most people will find the cheaper Camry hybrid a better value.

If you have any questions about the Fusion Hybrid, feel free to leave a reply.  I try to answer questions within 36-hours, often sooner.