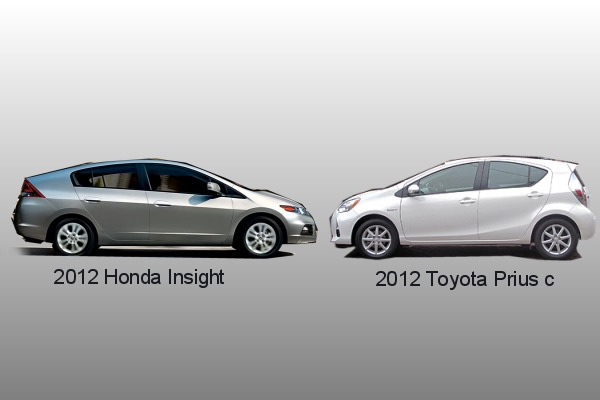 When Toyota released the third generation Prius in 2010 it was immediately ccompared to the second generation Insight that Honda released in 2009.  In my opinion it was not a fair comparison, since the Prius was generally $3-4000 more expensive. Now that Toyota has released the Prius c, which is in the same price range as the Insight, a more honest comparison can be made.

So once you get past the price, how do the Insight and the Prius c compare? The first thing most hybrid buyers will look at is the miles per gallon. Here the Prius c has a distinct advantage with a combined city/highway mileage of 50 miles per gallon. The Insight averages 42 mpg, roughly 18% less than the Prius c.  While 8 miles per gallon is a significant difference, based on my experience with a 3rd generation Prius, the difference might not be as great as the numbers indicate.  My Prius rarely delivered the miles per gallon it was rated at during the winter months. The Toyota sales people explained to me that this was normal; the Prius would not get the stated miles per gallon until its battery warmed up so on short drives its mpg suffers. My 2nd generation Honda Civic hybrid wasn’t nearly as affected by the cold weather as the Prius; possibly because it didn’t rely as heavily on its battery to improve its mpg.

The Insight’s interior has a subdued sophistication.

Where the Insight shines is the driving experience. The steering seems more responsive, the acceleration is better and the Insight is quieter (at least it seemed that way to me). In addition, the Insight’s overall interior appearance is better than the Prius. The Insight dashboard has a better layout, its gauges are larger and easier to read and overall the interior has a certain subdued sophistication that the Prius c lacks. 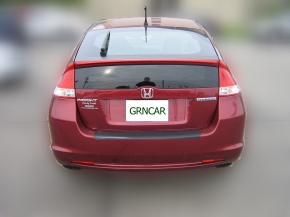 The Insight’s split rear-window may take getting used to. 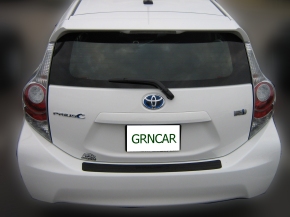 The Prius c has a small, but usable rear-window.

Either one of these two cars is a good choice. Both have a decent set of standard features and both are built by companies noted for solid, reliable hybrids. The final decision may be purely subjective. Do you like one car’s interior better than the others? Do you prefer the handling of the Honda versus the improved visibility of the Prius c? Do you need to eek every mile out of every gallon of gas or is 40+ mpg good enough?  Making a decision between the two might even come down to where you live. I think in the Midwest and Northern states the Prius c might have a slight advantage because of its better visibility.

The table below details some of the differences, and the similarities, between the Insight and the Prius c.  As you can see, these are two well equipped cars.

Overall, I give a slight edge to the Insight because I find it a more attractive car with better ergonomics and slightly better handling. However, I expect many will disagree with me and buy the Prius c.

If you have any questions about the Insight or the Prius c, feel free to leave a reply.  I try to answer questions within 36-hours, often sooner.