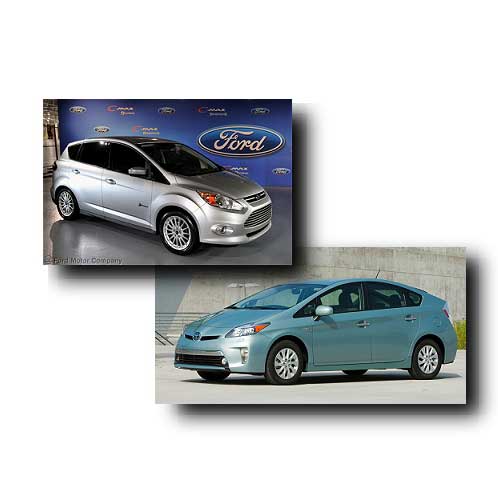 Toyota has a well deserved reputation for building high quality, practical hybrid vehicles.  The newest addition to their hybrid line-up is the Prius Plug-in.  Ford, while not the leader in the hybrid market that Toyota is, is working hard to catch up.  Ford recently introduced two plug-in hybrids of their own: the C-MAX Energi and the Fusion Energi.  As a four door hatchback the C-MAX Engergi is the most comparable to the Prius Plug-in.  Actually the C-MAX is best compared to the Prius v, but the Prius v isn’t available as a plug-in, at least not yet.  So lets take a hard look at these two plug-in hybrids and see how they stack up.

One of the biggest differences between the C-MAX Energi and the Prius Plug-in is their range on purely electric power.  While neither of them comes close to the plug-in leader –  the Chevy Volt with a range of 38 miles – the C-MAX is rated substantially better than the Prius by the EPA.  While EPA ratings are far from perfect (see Ford vs Consumer Reports), they are at least unbiased and usually can be used for purposes of comparison.  According to the EPA the C-MAX Energi has a range of 21 miles electric and a top speed of 85 miles per hour.  The Prius Plug-in has an EPA estimated range of 11 miles and a maximum speed of 62 mile per hour.  Advantage C-MAX.

Pricing and the Federal Tax Credit

Thanks to its more efficient gasoline engine the Prius easily wins the gas powered miles per gallon battle, but because of its small gas tank it loses the overall driving range battle.  The Prius Plug-in averages 51 mpg city and 49 mpg highway and has a total range of 540 miles.  The C-MAX Energi averages 44 mpg city, 41 mpg highway but thanks to it 14 gallon gas tank has an overall range of 620 miles (the Prius Plug-in has a 10.6 gallon tank).  This point goes to the Prius, but just barely.

The C-MAX has a distinct advantage in acceleration.  A difference that is noticeable not only in 0-60 tests, but also very noticeable while driving, because of its greater torque.  The C-MAX Energi accelerates from 0-60 in 8.1 seconds.  The Prius Plug-in somehow manages to be even slower than the standard Prius clocking in with a dismal 0-60 time of 11.3 seconds (the standard Prius 0-60 is 9.8).  Overall, the acceleration is a huge advantage for the Ford, especially when highway commuting.  Point C-MAX.

Another win for the C-MAX.  The C-MAX is quieter and its handling is more predictable than the Prius, passengers aren’t subjected to sharp kicks on rough roads as Prius passengers are.  The Prius, especially the more expensive Enhanced Prius Plug-in Hybrid with its 17” alloy wheels, has a slight edge in cornering due to it lower center of gravity, alloy wheels, and tighter turning radius.  This round is a tie.

The Prius Plug-in is so closely related to the non-plug-in version of the Prius that I feel confident that it, like all the other Prius models, will be very reliable.  The Ford C-MAX is new in 2013 so it’s reliability is an unknown.  Previous Ford hybrids (Fusion and Escape) demonstrated average reliability.  Point Prius.

The C-MAX Energi wins this battle handily.  In fact it’s hard to understand why Toyota even bothered with the Plug-in Prius.  Its electric only range is so limited, its cost so high (even after the Federal Tax Credit) compared to the standard Prius that I cannot fathom why anyone would buy one, especially when compared to the C-MAX.  If you don’t want the C-MAX because you are concerned about reliability – or maybe you just don’t like Fords – buy the standard Prius, you’ll get a lot more car for the money.