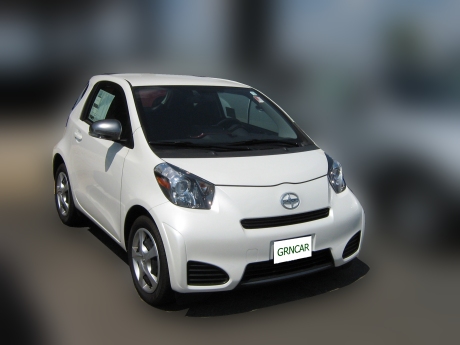 The ugly:  The seats.  Comfortable, but where did they find that upholstery? 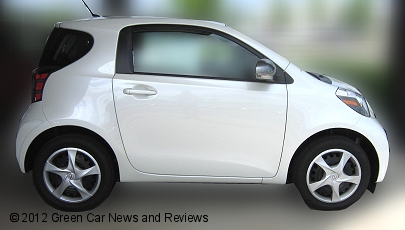 Let me start out by saying I like small, well thought out, inexpensive cars.  They’re cheap to purchase, cheap to maintain and cheap to insure.  When one comes along that is also innovative and fun to drive… well let’s just say I am a sucker for it.  When the MINI Cooper was released I couldn’t wait to own one.  Then came the Kia Soul, it wasn’t exactly a MINI, but not a bad car that provides a lot of bang for the buck.  Now there is the Scion iQ.  Start at $16,000, add floor mats and a few extras and at $16,400 you have a well equipped, very small car, that is fun to look at and fun to drive.

The iQ features a well thought out interior. Comfortable but ugly seats.

Everything about the design of the iQ is, and I say this conservatively, brilliant.  The dashboard layout is brilliant, the ergonomics – where everything is at your finger tips – is brilliant, removing the front glove box so that the passenger seat can be positioned further forward (allowing some knee room for the back seat passenger) is, once again, brilliant.  For the record, the iQ has extra storage in the passenger door to make up for the missing glove box. 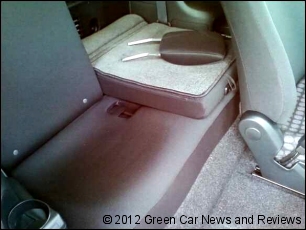 The iQ backseat is suitable for one adult, at best.      Very small foot-well behind the drivers seat.

Now that we’ve established the iQ is brilliant let me add a few small codicils.  Everything about the iQ is brilliant but mostly when you consider what an incredibly small car it is.  I thought the  MINI Cooper was small but the iQ is almost a foot and a half shorter and still, in theory at least, seats four people.  It seats them no better than the Cooper (I am not sure any adult over 5’10 has ever been in the back seat of a Cooper and if they were, it wasn’t quality time) but it is amazing the iQ has a back seat at all.  As I see it the iQ seats 2 adults and one child in relative comfort.  I did manage to get in the back seat of the iQ but only on the passenger side and at 6’1″ my head was brushing the top of the car.  I didn’t even attempt to sit behind the driver as I couldn’t find the foot-well.

How is the iQ to drive?  As it turns out, pretty good.  The handling is good, the acceleration, not great, but good enough. Plus, the Pioneer radio is more than adequate for drowning out any engine noise.  Like the MINI Cooper, the iQ doesn’t seem small when you’re on the inside.   The iQ has good visibility and the high roof and wide stance gives the impression of a much larger car… from the inside.

The lack of acceleration may be an issue for some but when you consider the iQ gets 37 miles per gallon (combined city and highway), you should know that something had to be sacrificed, and in the case of the iQ, it was acceleration.  Also, the radio really is good.  It’s much better than the standard radios on most cars and it has a USB port for your iPod so that it can be fully controlled by the radio.  Also standard on the iQ are volume controls built into the leather wrapped steering wheel along with Bluetooth connectivity.

Regarding safety.  I would be remiss if I didn’t mention that any car as light and small as the iQ is going to come off second best in most accidents.  To Scion’s credit they’ve done the best they can to make an accident survivable.  There are no less than 11 air bags in the iQ (even the rear hatch has one for the back seat passengers – should there ever be any).  Regarding the back seats, fold them down and use the space for groceries, don’t put people back there unless you have to.

One last thing.  The iQ is built tight.  Really tight.  Like the early Volkswagen Beetles you almost have to roll down a window in order to close a door.  It seems so tightly constructed that I can’t imagine a squeak or rattle developing (of course having said that, no doubt a report will appear decrying the rattles in the iQ) but from a layman’s standpoint the iQ seems very well made.

So, if small is your thing and if you don’t like spending a lot of money (or time searching for parking spaces) and you don’t need to carry more than three passengers, the iQ could be a very smart buy.

If you have any questions about the iQ, feel free to leave a reply.  I try to answer questions within 36-hours, often sooner.

Have fun and happy motoring.