Renault Twizy – Is This a Car? 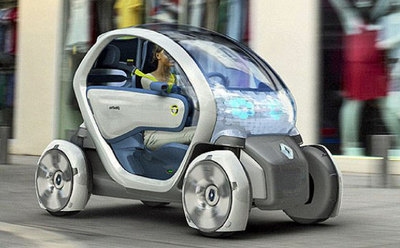 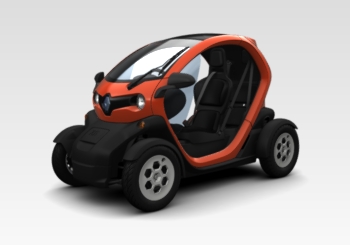 The Twizy has arrived in England.  While it may sound like a variation on a party game it actually is, at least at first glance, an electric car.  Recently released in England the Twizy is classified as a motorcycle for reasons not entirely clear.  It has four wheels and can have two doors so it looks like a car, however, if you opt for the doors they don’t have any glass.  Still, it looks like a car to me.

The Twizy is very small, about a foot and a half shorter than the Smart ForTwo (the smallest car sold in America).   If you opt for the optional doors, they open up, rather than out.  Because the doors don’t have windows the floor has a small hole for drainage. 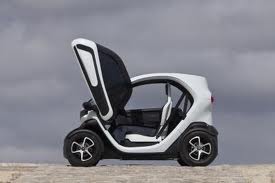 Renault Twizy – the optional doors open up, not out, making it easy to get of the Twizy in tight parking spaces

The Twizy comes in three versions, all of which are classified as motorcycles, and has a governor that limits its top speed to about 50 mph.  According to one of the testers the ride is unforgiving… which I interpret as meaning the car has no shock absorbers to speak of.  However, the handling is great and you can park the Twizy practically anywhere.  It has a range of about 60 miles and is easily plugged in and recharged in about 3.5 hours.

The Twizy sells for around 6,900 pounds in England which works out to about $9,600 American.  The battery pack is not included in the price, it is leased to the owner for about $63 per month.

Renault does not plan on importing the Twizy to the United States.  But if they ever do, watch out, you could end up in a Twizy.  Happy motoring.