We’ve had the Chevy Volt for a month now and overall the experience has been positive.  As expected the mileage hasn’t been great because of the cold weather.  Plus, if  I had made a few additional configuration settings for the Volt the mileage would have been substantially better – more about that later.  For the record, the Volt now has 665 miles on it and has used 9.4 gallons of gas for an average miles per gallon of 73.

To my disappointment, when I tried to find out the amount of electricity used by the Volt since purchase I was unable to do so.  I contacted the Chevy Volt Advisor team, they told me the Volt only shows you the amount used between each charge.  I guess I will have to start keeping a record.  I find it hard to believe that the car isn’t logging the amount of electricity used somewhere, it’s probably only available to a service tech.

To Chevrolet’s credit, they contacted me last week to get my feedback regarding the Volt, which I shared with them; both good and bad.  I’m afraid I may have overwhelmed my Volt advisor a little, she told me that usually people say they love their Volt and then thank her for calling.  The table below is an overview of the the items we discussed.  I’ve followed up after the table with detailed information regarding each item.

Heated seats are, of course, only important in cold weather, but if you live where its gets below freezing the Volt’s are the best.  Not too hot, not too cold.  But the best thing about the heated seats is the Volt has an option to turn them on automatically when the weather is cold. The colder it is, the higher the seat’s temperature. The automatic feature also works for the passenger’s seat, but only if someone is sitting in it.  Because the Volt takes a relatively long time to warm up the heated seats are a must have for colder climates.  If only it had a heated steering wheel like BMW offers.

We’ve had several snowfalls since we picked up the Volt, nothing too major, the biggest was about 6 inches.  Still, the Volt had no problem moving through the snow.  The anti-lock brakes are particularly good, none of the brake peddle vibration you usually feel when the anti-lock system kicks in.  Overall, I found the handling in the snow a pleasant surprise.

The Smart Key is very handy, it’s nice not having to take the key out of my pocket and then try to find the ignition keyhole on a dark night.

The rear-impact warning sensors are great, they have already prevented me from backing into another car.  They seem to kick in when you’re about 3 feet from an obstacle and beep faster the closer you get to it.

The “Now Playing” screen for the sound system is almost too good.  It provides so much information about the music you are listening to that it could be a distraction.  It’s great for the passenger though.  As is Pandora.

The Volt seats are firm, yet overall fairly comfortable.  I like the Volt’s seats better than the C-MAX, my wife, however prefers the C-MAX.

The Center Stack – what Chevy calls the unit with all the radio and climate controls – is okay but not great.  For example, It was several weeks before I found the button for skipping to the next song or the Home button.  Thankfully most of the Volt’s sound system can be managed using the steering wheel audio controls.  The climate controls on the center stack are poorly organized in my opinion, fortunately I haven’t had to use them much because I simply rely on the automatic settings.  Still, when I am in a hurry to find something, defrost for example, the tiny lithe buttons are less than helpful.

Ford SYNC has it all over Chevy MyLink when it comes to voice commands.  The Ford’s commands are more intuitive and the SYNC systems seem better able to understand midwestern english.  The MyLink system is constantly asking me to repeat commands.

I suppose because the Volt is an electric car it has to have an electric parking brake, but the Volt’s is poorly located and you can’t tell by looking at it whether it is on or off.  If it could glow or something when it is on, that would be helpful, instead you have to find the tiny little icon on the speedometer screen.

As I mentioned earlier, I love Sport mode.  I just wish I could leave the Volt in Sport mode all the time and forget about it.  Unfortunately the car resets to normal every time its turned off.

The rear-view camera, which I thought would be great, is great.  The problem is there is no need for it.  I generally ignore it and listen for the warning beeps instead.

The display screen for the Speedometer / Odometer could be a lot better.  Way too much useless information IMHO.

Okay, this is a picky little point, but recently we switched to Daylight Savings Time.  It never occurred to me that I would have to reset the Volt’s clock.  I assumed that with all the advanced technology of the Volt it could do something my $20 dollar LCD alarm clock could do.

That’s it for now.  Thanks for reading. 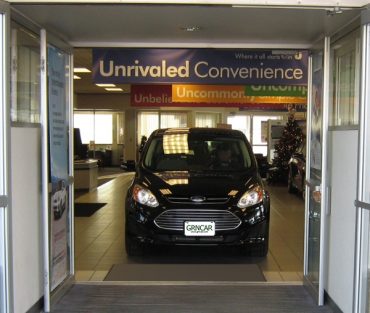 Over the holidays we took the Volt on a quick road trip to Omaha.  The weather was brutal (close…