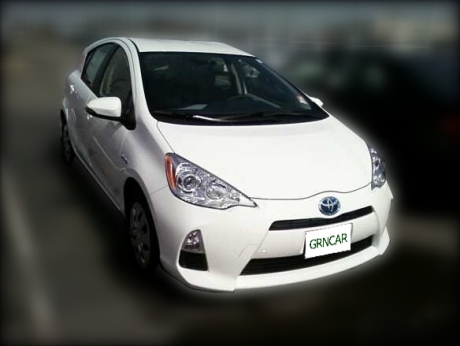 The Bad:  Sluggish off the line.

The Prius c (c for city) fixes almost everything I disliked about the third generation Prius (now known as the Prius HB).  The Prius c is cheaper and gets better mileage.  The rear and side visibility is better, it’s quieter and it handles better; overall it just feels more solid. 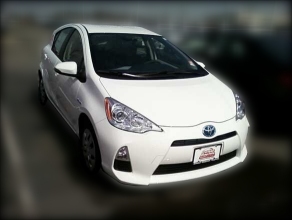 A few things haven’t improved compared to the Prius HB.  It is still hard to read  the digital dashboard in daylight, especially wearing sunglasses.   Plus, the dashboard provides way more information than any driver needs to know.  For example, you can use it to compare your miles per gallon in the Prius with other cars.  Do you really need to know how much better mileage the Prius is getting compared to another car?  I don’t think so.  It’s an obvious sales gimmick that almost makes me feel like Toyota is trying to distract the driver from some Prius short coming.

Fortunately, there really are relatively few short comings in the Prius c… other than it is short.  Not Mini Cooper short (the Prius c is about 10 inches longer), but still short.  There’s not a lot of room in the rear seat or a lot of cargo space (unless you fold the rear seat down).  However there is plenty of room for groceries and after all, city driving is what the Prius c is all about.

The Prius c  may seem a little under-powered but if you have ever owned a hybrid, you’re used to that.  At 10.6 seconds it’s zero to sixty time is almost a full second slower than the Prius HB but on the other hand it is only a half second slower than the Lexus CT200h hybrid which costs about $10,000 more.  The Prius c starts at $18,950 (not including delivery).  A well equipped Prius c is $21,635.  (The CT200h starts at $29,120).  What does the extra 10 grand for the Lexus get you?  In my opinion, not enough.  The Lexus is a little more than a foot longer, the seats are slightly more comfortable but the dashboard even more confusing and while the Lexus is quieter, the truth be told, I really couldn’t hear that much difference.  Both the Prius c and the CT200h are quiet enough to meet my needs.

Price is where the Prius c has a big advantage over other hybrids (except the Honda Insight).  Like the Insight the Prius c stays price competitive with other non-hybrid cars in its class.  If you can buy a Prius c for close to the same price as a similarly equipped Chevy Sonic why not get the extra 20 miles per gallon the Prius c offers for just slightly more money?  For example, a Chevy Sonic hatchback with an automatic transmission, power windows (the base model Sonic doesn’t offer power windows) and remote door locks costs around $18,100.  The Prius c with similar equipment (you lose the cruise control, painted alloy wheels and fold-down rear seats but gain automatic climate control and much better gas mileage) costs $19,710.

A nice thing about the Prius c is the back window.   Its not split in half like the window in the Prius HB which to me is an improvement.  And, unlike the Chevy Volt, you actually have a rear window wiper to clear the window.  One of my problems with the Prius HB is the lower half of the split rear window is almost useless in the winter because it is immediately covered with road grime. 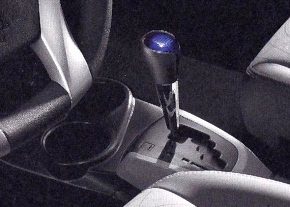 Also, the Prius c has a traditional shifter in the traditional location.  With the Prius HB you have a joy-stick, which is kind of interesting, but it doesn’t have a position for Park.  Instead of shifting into Park you push a button.  It just never really made sense to me.  It’s true you don’t often need to use the Park button because just about anytime you stop the car it goes into Park automatically (which made me wonder why have the button at all) but if you every really did want to put the car in Park it was inconvenient and confusing.  Also, they’ve moved the parking brake back to in-between the seats where it belongs, rather than on the floor where it might be confused with the brake pedal.

Unlike the Prius HB, where it seemed some things were done just to make it different, the Prius c has a more traditional layout.  Sometimes it’s good to be traditional.  For one thing, it makes the car much easier to drive for someone unfamiliar with it… which can be a real issue sometimes.  I know my wife didn’t look forward to driving our Prius HB when we went on trips for that very reason.  You shouldn’t have to take a driver training class in order to make a trip to the grocery store.  So it was nice to see the more traditional layout in the Prius c.

If you are interested in the Prius c, two other cars you may want to consider are the similarly priced Honda Insight and the slightly more expensive (and larger) third generation Prius HB.

Overall the Prius c looks like another winner for Toyota. Its priced right, gets great gas mileage and is actually kind of fun to drive.